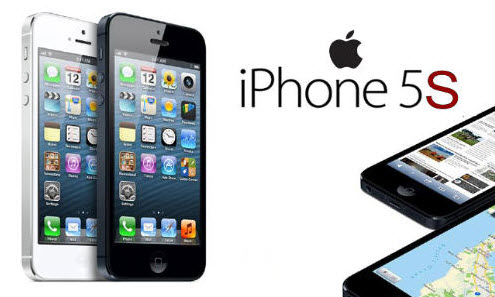 As expected, the new iPhone 5S looks very similar to the current iPhone 5, but it has several internal hardware improvements. It will also come in three color schemes: black with gray, white with gold, and white with gray.

The most important new feature of the iPhone 5S is its home button, which has been redesigned and includes a fingerprint scanner.

The fingerprint scanner will allow you to unlock your phone by placing your finger on top of the home button. It will also let you sign into apps and the iTunes store so you don’t have to enter in a password every time you download a new app, song, or video from Apple. The iPhone 5S stores your fingerprint on its processor.

The home button no longer has the same circle-in-square design. Instead, it’s completely smooth and has a stainless steel ring around it. The home button itself is made of scratch-proof sapphire.

The next big feature is the camera. Apple improved the camera sensor in the iPhone 5S to bring in more light and show bigger pixels for better overall photo quality. The camera flash now has two LED lights, which will help colors and skin tones appear better in low-light environments.

As for the camera software, you’ll be able to take several photos at once in “burst mode.” The software will then help you choose the best photo of the bunch.

The iPhone 5S isn’t the only new iPhone from Apple today. The company also announced the iPhone 5C, which has nearly identical specs as the iPhone 5, but is wrapped in a plastic casing that comes in a variety of colors.